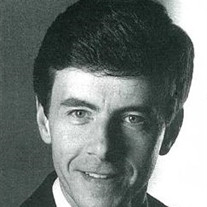 William C. "Bill" Evans Age 72, of Highland Park, formerly of Upper St. Clair, passed away on Friday, January 3, 2020. Beloved husband for 46 years of Linda Evans; loving father of William Thomas (Allison) Evans and Kristen Lynn (Stefan) Grill; and grandfather of Emily, Lily, Abigail Evans, Mary and Zoe Grill. Bill was the Director of Music and Sacred Arts at Westminster Presbyterian Church in Upper St. Clair for 13 years, where he directed a multi-faceted program for all ages. He was a native of Oneonta, NY. Bill was educated in Philadelphia at Curtis Institute and Temple University, Baltimore at Peabody Conservatory, and New York studying such well known teachers as Alexander McCurdy of the Curtis Institute of Music, Robert Elmore, and Robert Baker. His life was devoted to the Church and its chief musical instrument, the organ. Known for his leadership in the musical ministries of several of the nation's great congregations, Bill served St. Matthews Cathedral, Washington, D.C. where he gained national prominence when he played for the John F. Kennedy Memorial Mass. The Plymouth Congregational United Church of Christ in Des Moines Iowa, Good Samaritan Episcopal Church in Philadelphia, PA, First Presbyterian Church in Evanston, Illinois, Wellshire Presbyterian Church in Denver, CO, Roswell Presbyterian Church in Atlanta, GA. As a recitalist, Bill was well known for his imaginative and alluring programs which appealed to listeners of all ages. His skill with transcriptions delighted hosts of people throughout his career. Robert Baker said: "If the 1990's can produce a baker's dozen of Bill Evans' there might yet be hope for the organ as a concert instrument. Brilliant virtuosity, imaginative programming, impeccable musicianship; he has it all. Engage him!" As a teacher of Organ and Piano he encouraged many to become church organists. He was a beloved teacher and mentor to many. Bill was a pilot and excellent teacher launching many into professional commercial and/or military pilots. He founded the Pgh Pro Air Services at Allegheny County Airport before 9/11 when general aviation was thriving. A Celebration of Life Service will be held at Westminster Presbyterian Church, 2040 Washington Rd., Pittsburgh, PA 15241 on Saturday, January 25, 2020 at 11:00 am with a luncheon to follow. Memorial donations may be made to Gateway Hospice, www.gatewayhospice.com, and/or the Westminster Presbyterian Church Organ Fund, to help maintain the Austin Organ or the Alzheimer's Disease Research Center for the Lewy Body study. He was a part of the brain donation study for Lewy Body research.

The family of William C. Evans created this Life Tributes page to make it easy to share your memories.

Send flowers to the Evans family.