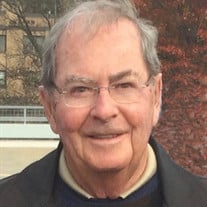 Thomas Steele Joseph, Jr. Age 90, passed away at home on October 16, 2019 after a prolonged illness with the comfort of his wife, Carol, by his side. Tom was born on May 4, 1929 in Pittsburgh to Thomas and Mary (Whelan) Joseph. He spent his early years in Morningside and eventually East Liberty and attended St. Vincent Preparatory College before joining the Air Force in 1950. After returning home to Pittsburgh, Tom enrolled in Duquesne University where he met his former wife, Jean (Pascarella) Joseph. He joined his father and grandfather at the family wallpaper and painting business, Snively-Joseph and Company, shortly after marriage and remained there until it closed its doors after 120 years. Tom then sold long-term care insurance for Banker's Life for over 25 years. After divorcing, Tom married Carol Sue (Mohn) Joseph. They spent 41 years together living in the Fox Chapel area. Tom enjoyed watching and playing sports and had a busy social life. Always the life of the party, Tom cherished his family and friends throughout his life. Tom is survived by his loving wife, Carol; three daughters, Leslie Kennedy and her husband Bob of Gaithersburg, MD, Diane Dorney and her husband Mark of Gaithersburg, MD, and Lynne Schaefer of Gaithersburg, MD; his sons, Thomas Steele Joseph, III and his wife, Deirdre Burke of Sewickley, PA, and Jeff McGaughey of Silver City, NM.; 13 grandchildren, Mike, Dan, Jessica, Jeffrey, Brenna, Caitlyn, Coleman, Stephanie, Kevin, Mac, Sydney, Madeline and Matthew; and eight great-grandchildren, Hayden, Miles, Quinn, Harper, Heath, Parker, Lena and Poppy, along with nieces and nephews. He was preceded in death by his parents; his brother, Robert Joseph; sister, Nancy Lou Jenkins; and his brother-in-law and long-time business partner, Richard Jenkins. Keeping with Tom's wishes, there will be no funeral services. He suggested that in lieu of flowers, take the Steelers minus the points.

Thomas Steele Joseph, Jr. Age 90, passed away at home on October 16, 2019 after a prolonged illness with the comfort of his wife, Carol, by his side. Tom was born on May 4, 1929 in Pittsburgh to Thomas and Mary (Whelan) Joseph. He spent his... View Obituary & Service Information

The family of Thomas S. Joseph Jr. created this Life Tributes page to make it easy to share your memories.

Send flowers to the Joseph family.