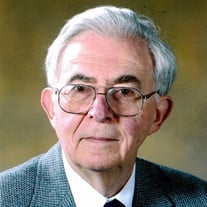 Dr. Thomas G. Benedek, Age 94 of Verona, formerly of Squirrel Hill Pittsburgh, died peacefully after a short illness on February 15, 2021 at UPMC, St. Margaret's Hospital. He was born in 1926 in Leipzig, Germany and escaped Nazism in 1936 when he emigrated to Chicago with his parents, Dr. Tibor Benedek, Dr. Therese Benedek; and his sister, Judy. Higher education at the University of Chicago was interrupted by WWII, when he enlisted in the Navy and served in the Pacific. A keen photographer, he was responsible for taking some of the official photos of Japanese military officials signing Documents of Surrender on his destroyer. Those photos are filed with the official US Military Historical Records. After the war, Tom graduated from the University of Chicago, and continued his education at their Medical School where he met his beloved wife of 70 years, Gladys. They married in Chicago in 1950, and after completing his Internal Medicine and Rheumatology training, they moved with their two sons to Pittsburgh in 1956. Dr. Benedek had two distinguished careers in patient care and the other in teaching and research. He served as Chief of Rheumatology and Director of the Arthritis Clinic at the Oakland VA Hospital, a position he held for over 30 years. He enjoyed teaching courses in the History of Medicine, rising to the rank of Professor of Medicine, at the University of Pittsburgh School of Medicine. He always had time for his students, many of whom asked for advice on their career choices. He published numerous scientific articles in medical journals and the Encyclopaedia Britannica. He also had 2 books published on the clinical aspects and history of rheumatic and infectious diseases, with a specific interest in gout and scleroderma. The later book was completed when he was 92 (2018). The breadth of his scholarship in the history of medicine across time and subjects is noteworthy. Dr. Benedek was president of the American Association for the History of Medicine, and has lectured at their International Conferences, sometimes taking him to moments in history. He was in Prague soon after the USSR invaded in 1968, went into East Berlin to see the conditions during the communist occupation, and returned to Leipzig when a building honoring his mother's research in psychoanalysis was dedicated. He also traveled widely with Gladys, as both were curious to visit foreign countries and be exposed to their cultures. Before moving to a retirement community in Verona 2 years ago, Tom and Gladys lived in Squirrel Hill for 60 years, where they lovingly raised their three children, all of whom attended Taylor Allderdice High School and have successful careers. He is survived by his devoted wife, Gladys; and their 3 children, James (Laurie), David, Martha (John Mather); and 3 grandchildren, Dakota, Philip and Melissa; and also, Tom's sister, Judy in Chicago; and her 3 children. A memorial service will be arranged at a future date when friends and family can safely travel. In lieu of flowers, a donation could be made to the Division of Rheumatology and addressed to Dana Ascherman, MD, 712 Biomedical Science Tower South, 3500 Terrace Street, Pittsburgh, PA 15261.

Dr. Thomas G. Benedek, Age 94 of Verona, formerly of Squirrel Hill Pittsburgh, died peacefully after a short illness on February 15, 2021 at UPMC, St. Margaret's Hospital. He was born in 1926 in Leipzig, Germany and escaped Nazism in 1936... View Obituary & Service Information

The family of Thomas Benedek created this Life Tributes page to make it easy to share your memories.

Age 94 of Verona, formerly of Squirrel...

Send flowers to the Benedek family.