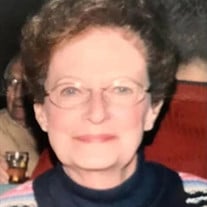 Loving mother, Shirley Arline Harris Thompson of York, PA passed away on Tuesday December 1, 2020 at UPMC Cranberry Place, Pittsburgh, PA. Born April 27, 1929 with her twin sister, Barbara, in Scranton, PA to Walter and Esther Harris, Shirley graduated from Central High School in 1947. She attended Marywood College of Scranton and continued her education at The Pennsylvania State University earning a degree in Home Economics. It was here that she met the love of her life, Donald B. Thompson. They married in 1952 and moved to East Berlin when he obtained a teaching job. They lived in West York for a few years and Shirley worked at York Caterpillar where she met the first of her lifelong friends. Don got a job teaching at Eastern High, they had their first child, Sandy Thompson Arnold, and purchased a home in the newly developing Haines Acres where she lived for 60 years. Shirley and Don were founding members of Eastminster Presbyterian Church, which she attended for many years and was actively involved in Women's Circle. Daughter Debbie Thompson Smith came along and the family was complete. Shirley was a devoted mother, her family was her life. She was the glue that held together the family business, Thompson's Homeowner Service, with Don for thirty years. She loved playing bridge with her long time girlfriends, and was active in Eastern Star. In 2017, Shirley moved to assisted living in Pittsburgh to be near daughter Sandy and sister Barbara, and then to Cranberry Place in 2019. Sadly, COVID-19 was too much for our dear mother to take on. Shirley leaves behind her sister Barbara Harris Wright (Charles) of Sewickley PA; two daughters: Sandy Thompson Arnold (Robert) Allison Park PA, Debbie Thompson Smith (Eric) Chico CA; and two lovely granddaughters: Kristen Arnold Klurfield (Dewey) San Jose CA, and Megan Arnold of Pittsburgh. In lieu of flowers, donations can be made in her memory to honor the heroes who took care of her to: UPMC Cranberry Place Activities Department, 5 St Francis Way, Cranberry Twp, PA 16066. A service will be held in the summer of 2021 at Susquehanna Memorial Gardens where she will be laid to rest next to her loving husband.

The family of Shirley A. Thompson created this Life Tributes page to make it easy to share your memories.

Send flowers to the Thompson family.