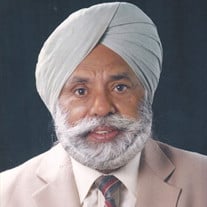 The funeral service for Dr. Singh will be live streamed through Zoom. The live stream will begin on Sunday at 11:45am. Below is the link to join. Time: Jul 26, 2020 11:45 AM Eastern Time Join Zoom Meeting https://us02web.zoom.us/j/82598246744 Meeting ID: 825 9824 6744 If you have ever wondered if one person can make a difference in the struggle of life then you should read this. Dr. Sarjit Singh, Professor Emeritus of Clarion University, died Thursday, July 16, 2020, at UPMC St. Margaret Hospital at the age of 95. He was born on February 1, 1925, to Sardar Ram Singh Rangi and Sardani Bishan Kaur Rangi in the village of Mukandpur (Ludhiana) in Punjab, India. Drawn to serve but with little knowledge of war at only 17 years of age, Dr. Singh enlisted in the Sikh Regimen of the British Indian Army on July 4, 1942. He served for 18 years through World War II and the War of India's Independence during the violent partition of British India in 1947. He recalled struggling to sleep in self-dug trenches while listening for mortars as he braved the cold of the Kashmir valley. He valued the diligence, endurance and maturity he quickly gained in his military service. With a piqued interest in higher education, he ambitiously educated himself while serving in the military. He was encouraged by his superiors in the Army to continue his studies and was honorably discharged to make a career for himself abroad in academia. Constantly aspiring to achieve more and inspiring others to do the same would become a recurring motivator through his life. Seeking an opportunity for a better quality of life, he applied for post-graduate opportunities available in the United States. By teaching himself and passing equivalence exams for his bachelor's and master's degrees from Punjab University in India, he earned his seat as a Ph.D. candidate in economics at Oklahoma State University in 1961. There, he excelled as a gifted student and teaching assistant who often corrected his professors. His wife, Mrs. Gian Kaur Singh and his two eldest sons, Daljit and Gurmit, immigrated to the United States to join him in Oklahoma two years later. They later had a third son, Jaspaal, who was born in Brookville, Pennsylvania. He encouraged his family to adapt quickly and embrace the American Dream, placing emphasis on achieving success through hard work, discipline, and education. Through their commitment, all three of the couple's sons are now well-established physicians practicing in the Pittsburgh area. Dr. Singh accepted a position as professor of economics at Clarion University, and settled there in 1964. His passion, deep understanding of the field, ability to stimulate critical thinking in lieu of rote learning, and invested advising earned him esteem amongst students through his 32-year teaching career. He was admired by his students for his tireless work ethic, decisiveness and strong commitment to excellence, and ultimately was named chairman of the economics department and earned teaching tenure. During his teaching career he authored an academic book on land taxation of India and fought against discrimination. He also successfully challenged IRS taxation rules. After he retired in 1996, he and his wife moved to Pittsburgh to be closer to their family and helped to raise their granddaughters Simran and Pamela. Between 1968 and 1995, he sponsored or assisted in the immigration to the United States of 65 immediate and extended family members, all of whom have become successful and productive citizens. He and his wife not only provided each immediate family member a welcoming home in the United States, but also orientation into American culture when they arrived, and guided them into professions such as engineering, nursing, medicine, teaching, pharmacy, manufacturing, and entrepreneurship to foster self-reliance, achievement and long-term stability. There were no handouts as he placed high expectations on each person, and in this way Dr. Singh established himself as a mentor and admired patriarch to the extended family. Through his life, Dr. Singh remained a highly principled man and devout follower of Sikhism. Moved by attacks at the holiest of Sikh temples in 1984, he became a vociferous champion of Sikhism's humanitarian values of freedom, equality, justice, and service to others. He was a prolific reader and a skilled author whose writings based on his beliefs and perspectives on tenets of his Sikh faith and its history have appeared in multiple prestigious newspapers and publications. For this reason, the family asks that in lieu of flowers, donations be made to the Sikh Coalition, www.sikhcoalition.org. The family is grateful to his youngest son, Dr. Jaspaal Singh for his devoted care and companionship through the years. Dr. Singh is survived by sons, Dr. Daljit Singh M.D. of Fox Chapel, Dr. Gurmit Singh M.D. of North Hills and Dr. Jaspaal Singh M.D. of Ross; daughter-in-law, Dr. Nina Singh M.D.; granddaughters, Simi and Pamela Singh; brothers Inder Singh Rangi and Randhir Singh Rangi. Visitation Saturday, July 25, 2020 from 2-4pm and 6-8pm at the Thomas M. Smith Funeral Home and Crematory, Ltd., 930 Center Avenue, Blawnox, PA 15238. Funeral Service Private.

The family of Sarjit Singh created this Life Tributes page to make it easy to share your memories.

The funeral service for Dr. Singh will be live streamed through...

Send flowers to the Singh family.