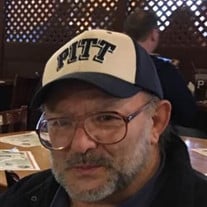 Ronald "Cle" Leonardi April 24, 1953 - November 24, 2019 Age 66, of New Kensington, passed away peacefully, surrounded by family, on Sunday, November 24, 2019. Born in Export to the late Joseph Leonardi and Jean (Tony) Nicastro (Gale-Leonardi). He grew up in Arnold and graduated from Valley High School in 1971. Cle was the part-owner of Nicastro Rentals. He enjoyed spending time with his family and friends and reading the newspaper from front to back. He was also an avid sports fan and a member of the American Legion Arnold, Post 684. Cle is survived by his daughter, Vanessa (Nicholas) Black of New Kensington; grandchildren, Jada, Bella, Kayla and Nicholas Black; brothers, Joseph Leonardi of Pittsburgh and Larry (Lori) Nicastro of New Kensington; sister, Gale (Dave) Nicastro-Sowol of Lower Burrell; and nieces and nephews, Jamie (Josh Line) Leonardi of Oakmont, JR Leonardi of Pittsburgh, Michael Nicastro of Pittsburgh, Lindsay Nicastro of Boston, MA, Ryan and Megan Sowol both of Lower Burrell. Per his wishes, there will be no visitation or service. As Cle loved to say, "Ring the Bell!"

The family of Ronald Leonardi created this Life Tributes page to make it easy to share your memories.

Send flowers to the Leonardi family.