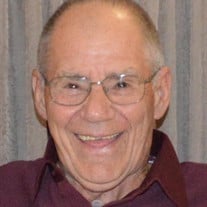 Robert Paul "Tank" Tantlinger Born in Freeport, Pennsylvania on December 2, 1936, age 84, of Natrona Heights, died due to complications of the coronavirus on January 5, 2021, surrounded by his loving family as he went home to be with the Lord. He is survived by his loving wife of 60 years, Donna Lee Leightner Tantlinger; children, Marcia Harbison, of Tarentum, Robin (David) Hughes, of Sarver, Traci (Harry Brothers) Ewing, of Natrona Heights and a granddaughter he raised as his own, Jamie Hollenbaugh, of Tarentum; grandchildren, David (Hilary Urbanski) Hughes Jr., Nicole (Justin) Gehry, Courtney (Abner) Gonzalez, John (Brea Suchonic) Ewing IV, Hillary Harbison and Jordan Harbison; and great-grandchildren, Owen Joseph Walsh, Harland Robert Gehry and Amelia Girard. He was preceded in death by his parents, Harry Filmore Tantlinger Sr. and Edna Pearl Bruner Tantlinger; mother-in-law, Helen Leightner; siblings, Harry (Nancy) Tantlinger, Gerri (William) Colgan and Eleanor (Lowell) Dougherty. He was a proud veteran of the U.S. Air Force and a coalminer for 20 years before he established B. Tantlinger Construction. He was a master carpenter and passed on his immense knowledge in the field. Robert was a sports enthusiast, a Steelers fan, he especially liked to watch his grandchildren play baseball, football, soccer, cheerleading and gymnastics. He enjoyed camping, classic country music, dancing, golfing and road trips with his wife. He greeted all those he encountered on his daily 2-5 mile walks through the neighborhood and visited with many from his front porch. The Tantlinger home was known for entertaining and strengthening bonds with family and friends. A memorial service will be held at Abundant Joy Fellowship, Tarentum, PA, officiated by Pastor Cathy Blythe. The date will be announced when public gatherings are deemed safe again.

Robert Paul "Tank" Tantlinger Born in Freeport, Pennsylvania on December 2, 1936, age 84, of Natrona Heights, died due to complications of the coronavirus on January 5, 2021, surrounded by his loving family as he went home to be with the Lord. He... View Obituary & Service Information

The family of Robert Paul Tantlinger created this Life Tributes page to make it easy to share your memories.

Send flowers to the Tantlinger family.