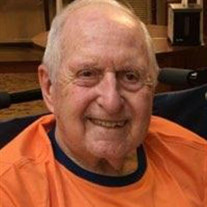 Richard Paul Balash, age 91 of Natrona Heights, transitioned to his eternal home on Wednesday November 3rd, 2021. Rich was born July 15, 1930 to the late Frank Balash and Anna (Barch) Balash. After graduating in 1948 from Har-Brack High School in Natrona Heights, Rich spent four years in the Navy on the USS Migadan tugboat as an Engineman Petty Officer 3rd Class during the Korean Conflict. He later enlisted in the Pennsylvania State Police January 1954, serving 31 years and retiring from the Kittanning Barracks in 1985. As a State Trooper he was a frequent guest speaker for Kiwanis International and proud member of the Fraternal Order of Police and Brady Paul Lodge #54 until his passing. After retiring from the State Police, Rich spent his time working within the community and found his second calling working as a school bus driver for Laidlaw Transit and taught many people how to drive buses. He also worked in the Fox Chapel School District as a sports bus driver for both girls and boys sports. Rich was an active member of the Rotary Club for 10 years and a 32nd degree Mason, involved with the Shriners. He had been an active member of the Central Presbyterian Church and was an elder on the Session for many years. In 2003 he became a member of the Bethesda Baptist Church in Durham, N.C. An avid history buff, Rich himself was a part of many important moments throughout history. He was most proud of working the local security detail for then Senator John F. Kennedy during his Presidential Campaign. One of Rich's greatest achievements was his home, which he built and created family memories in for many years. Known around the neighborhood for his enjoyment of gardening and sharing of life stories, Rich became a community pillar and was loved by neighborhood kids. As a skilled swimmer Rich enjoyed family vacations to Myrtle Beach, which became a yearly tradition. Rich's legacy will continue to endure at the Wall of Honor Memorial at the Pennsylvania State Police Academy in Hershey, Pennsylvania. Rich is survived by his wife of 18 years Barbara (Smith) Balash; daughter Amy (Mark) Armanious; step-daughter Heather (Shane) Tayner; brothers Frank Balash and John (Sandy) Balash; sisters Patricia Amrhein and Elizabeth Higgins; grandchildren David (Monica) Armanious and Olivia Tayner; and two great-grandchildren. Rich was preceded in death by his first wife of 45 years, Dolores (Barbiaux) Balash in 2000. A private memorial service will be held at a later date. Professional services provided by Thomas M. Smith Funeral Home and Crematory Ltd, 930 Center Ave, Blawnox PA. 15238. www.thomassmithfuneralhome.com In lieu of flowers, donations may be made to Brady Paul F.O.P Lodge #54 (724)-282-6475 or Animal Protectors www.animalprotectors.net

The family of Richard P. Balash created this Life Tributes page to make it easy to share your memories.

Send flowers to the Balash family.