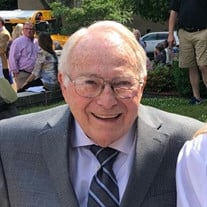 Raymond Lewis, Jr. November 20, 1938 to August 25, 2021, Dad and Pap to those who loved him Ray Jr. grew up in 1950's Conneaut Lake, driving fast Fords, hanging out at the amusement park, and taking dates to Hank's Frozen Custard and Eddie's Footlong Hotdogs. The second and only son of Raymond Lewis and Dorothy Mae lime (sisters, Myra Mae, Myrtle Lewis Maines), he learned his manners around home-cooked meals and how to fix-things right the first time. He met his future wife, Marlene Francis Lewis, on one of those warm summer lake nights. From that moment, he knew what he· was running toward. After many high speed runs down old Route 19 to Pittsburgh and back to see Marlene, he graduated Conneaut Lake High School in 1957 and married the love of his life on June 17, 1958 in Winston-Salem, North Carolina. After graduating from Pittsburgh Institute of Aeronautics, Staff Sergeant Lewis was a proud member of the US Air Force 95th Fighter Interceptor Squad in Dover, Delaware, between 1961and 1965, a moment in time that covered the Cuban Missile Crisis. A move to civilian life in Pittsburgh with Allegheny Airlines (US Air) included serving with the PA National Guard, where he also took a course to assist a pilot in flight. Ray and Marlene dearly loved their three boys, raising them to love God at St. Mary's Church of Sharpsburg: Raymond C. Lewis, III, George B Lewis, and Bernard J. Gottschalk, MD (brother of Marlene). Family life brought homemade bicycles built for two, a 1940 Ford replica remake, go carts, milk -jug helicopters, and DQ ice cream trips for the Sharpsburg baseball team after a win. Pap was well known for working all day on jet engines and then falling asleep under cars at night that he would fix for free. Weekends were spent boating in Harmarville on the river with family. He still managed to be a 32nd Degree member of the Masonic Organization and became a Shriner, being especially proud of the work that was done for crippled children at the Shriner Organization. After 37 years at US Air, Ray brought his grand, trusty toolbox home and-retired to spend time with the love of his life, Marlene. After 3 children, 6 grandchildren, and 2 great-grandsons, the good Lord called Pap's name. We are fairly sure He was looking for a kind word and needed something fixed right. Pap was a kind, kind man that devoted his life to helping others. In lieu of flowers, Ray would love each of you to do a kind act for a fellow that really needs it.

Raymond Lewis, Jr. November 20, 1938 to August 25, 2021, Dad and Pap to those who loved him Ray Jr. grew up in 1950's Conneaut Lake, driving fast Fords, hanging out at the amusement park, and taking dates to Hank's Frozen Custard and Eddie's... View Obituary & Service Information

The family of Raymond Charles Lewis Jr. created this Life Tributes page to make it easy to share your memories.