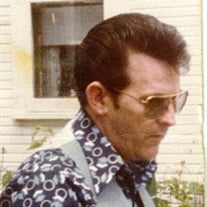 Raymond A. "Ray" Fetty Age 81, of Utica, born March 3, 1940, passed away on April 30, 2021. He was the former husband of Cassandra A. Ward, remaining friends through their lives; loving father of Cassandra "Cassie" (Danny) Bryan; grandfather of 1, great-grandfather of one; brother of Joyce Pitts, Linda Yost and the late Larry Fetty; and a son of the late Lawrence W. Fetty and Mary E. Gladwell Fetty. Also survived by numerous nieces, nephews and extended family. Ray was an avid rescuer of all 4 legged friends, always having food and bedding available. He was always ready for a hand of poker or a good western. He could often be found listening to western or folk music. It was a safe bet Dr. Hook, Jim Croce and George Jones would be blasting on his CD player. In 1956, Ray served in the Marine Corps and then transferred to the Army in November of 1959. He served multiple tours during the Vietnam War and was honorably discharged, retiring with the rank of Master Sergeant in February of 1980 with numerous medals. Ray also served as a kiddie boxing trainer while in the military. He was a Mason 32 of the Scottish Rite, issued by the Panama Canal Consistory in the Valley of Balboa, Panama in 1974. Ray had many storied of the places he had been, but never what he had done. He was a very giving man and a wonderful jokester. Most importantly, he was an excellent father. He will be missed by many, including his 4 legged friends, especially by his #1 grand-cat, Baby Batt. He will remain in our hearts, always. Per Ray's wishes, there will be no visitation. Interment will take place at 1pm on Thursday May 20, 2021 in the National Cemetery of the Alleghenies, 1158 Morgan Road, Bridgeville, PA 15017. Memorial donations are suggested to the Humane Society, www.wpahumane.org, or an animal rescue of your choice.

Raymond A. "Ray" Fetty Age 81, of Utica, born March 3, 1940, passed away on April 30, 2021. He was the former husband of Cassandra A. Ward, remaining friends through their lives; loving father of Cassandra "Cassie" (Danny) Bryan; grandfather... View Obituary & Service Information

The family of Raymond A. Fetty created this Life Tributes page to make it easy to share your memories.

Send flowers to the Fetty family.