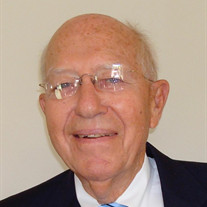 Phillip H. Smith Age 94, died peacefully at his home in Fox Chapel, on Friday, March 20, 2020. Phillip was born in 1926 in Sydney, Australia, the youngest of five. After attending primary and secondary school, he left Scots College at age 16 to join the Australian Merchant Navy during World War II. Following that service he attended the University of Sydney, studying Mining and Metallurgy, graduating with first-class honors and head of the class. While attending university he was active in the Palm Beach Lifesaving Club and rowed for Wesley College. Awarded a Nuffield Scholarship, he traveled to remote parts of Australia evaluating mining sites. Phillip sailed to the United States to attend the Massachusetts Institute of Technology (MIT) as a Fulbright Scholar. He studied Metallurgy and Industrial Management earning a graduate engineering degree in metallurgy and a minor from the Sloan School of Management. Upon graduating from MIT Phillip joined Inland Steel in Chicago as a metallurgical engineer. While there, he and Professor Elliot of MIT were awarded the National Steel Award for an outstanding technical paper. He also published papers on blast furnace production, the alloying of steel, and the manufacture of free-machining steel in which field he held patents. After four years Phillip moved to LaSalle Steel company and was successively research engineer, Director of Purchasing and Director of Planning. While there he earned a Diploma in Industrial Relations at the University of Chicago. During the LaSalle years, Phillip became a citizen of the USA. After 8 years at LaSalle he joined Copperweld Corporation at its steel plant in Warren, Ohio. Two years later he was elected Vice-President of Development. In 1967 he became President and Chief Executive Officer and, in 1974, Chairman of the Board. During the ten years of his leadership Copperweld thrived. FinancialWorld magazine named him as one of three outstanding chief executives in the steel and metalworking industries. He was then persuaded to become President of the North American operations of the Bekaert group of Belgium, a manufacturer of wire and wire products. Following three years of record earnings for the American subsidiary, he resigned to form his own private consulting firm, Smith Yuill and Company. The firm advised major banks, government bodies, and corporations in the U.S., Australia, Japan, New Zealand, and the Peoples Republic of China. The U.S. Government Pension Benefit Guarantee Corporation retained him to assist in several bankruptcy workouts. Phillip edited and wrote texts on management, and published and lectured on management science and strategic planning. He was a guest lecturer or adjunct faculty at many business schools including University of Pittsburgh, Carnegie Mellon University, Grove City College, MIT, Berea College and Dalian University of Technology in China for which he wrote A Guide to Executives on the Way Up and served as dean of the Senior Executive summer program for several years. He established his own publishing house and authored Quaker Business Ethics, Board Betrayal: The Weirton Steel Story and three volumes of memoirs. He also published "The American Economic Commentary", a newsletter written for a wide audience of business professionals both foreign and domestic. He served on the boards of numerous business and public organizations as well as serving on the Boards of Trustees of several universities and seminaries. He was a founder of the University of Sydney Foundation USA. Grove City College and the University of Sydney awarded him honorary doctoral degrees. Phillip always had a good book going and was a prodigious letter writer. He enjoyed both golf and tennis. He loved to sing and the sound of bagpipes. He liked to drive and taking road trips. Phillip traveled widely throughout the world. He was an avid gardener but left weeding to his crew. He was famous for his "work parties". Phillip's Christian faith was important to him. Wherever he lived he participated in the life of a local church: washing dishes, teaching Sunday School, serving as elder, trustee, chairing capital campaigns. He was generous with his time and resources. Phillip is survived by his wife of 64 years, Martha; five daughters; sons-in-law; eleven grandchildren; and four great-grandchildren. Phillip was preceded in death by a son; and a grandson. In lieu of flowers, donations may be made to The Greater Pittsburgh Food Bank. A memorial service will be held at a later date.

Phillip H. Smith Age 94, died peacefully at his home in Fox Chapel, on Friday, March 20, 2020. Phillip was born in 1926 in Sydney, Australia, the youngest of five. After attending primary and secondary school, he left Scots College at age... View Obituary & Service Information

The family of Phillip H. Smith created this Life Tributes page to make it easy to share your memories.

Send flowers to the Smith family.