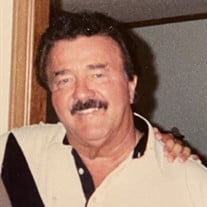 Peter G. Sekel Age 83, of Verona, passed away on Sunday, September 26, 2021. He was the loving father of Sheree (late James) Grice and Peter N. (Amanda Smith) Sekel; grandfather of Matthew Grice and Peter A. Sekel; brother of Elizabeth Campbell and the late Paul Sekel, Mildred Chopski, Sam Sekel and Butch Sekel; son of the late Paul and Sophie (Zitkovich) Sekel; and uncle to numerous nieces and nephews. As a youth he had a love of the water and later as an adult became an avid boater spending many hours on the Allegheny River. Pete was a veteran of the Army and was stationed in Germany. He fondly remembered those years as some of the most memorable as a young man. A lifelong golfer, he always looked forward to tee time and cherished the friends he made participating in the golf leagues over the years. Later in life he hit the yard sale circuit and could be found browsing the tables early nearly every Saturday morning. In fact, he played a round of golf and attended a yard sale only weeks before his passing. Another love of his was going to breakfast at local restaurants with his children and grandchildren. While waiting for the food to be served, he would play hands of poker with them to pass the time; winning more often than not. A pleasant reminder of the days before smart phones and the internet. Pete had a lifetime career in the car industry. He was a salesman, manager, and business owner. He always had a smile on his face and had that unique ability to make others smile, as well. That smile followed him into retirement. No longer a salesman, he always brought a gift when visiting just to let you know he was thinking of you. A generous and caring person to the end, during a recent visit to the ER he offered the attending physician a spare putter he had at home. Pete was called "Sonny" by his elders, "Rabbit" by his peers, Dad by his children, and "Pappy" by his grandchildren. A loving father, grandfather, father-in-law, brother, uncle, cousin, and dear friend, he will be deeply missed. Visitation will be held from 4-8pm on Tuesday, October 5, 2021 at the Thomas M. Smith Funeral Home and Crematory, Ltd., 930 Center Avenue, Blawnox, PA 15238. Burial to remain private.

The family of Peter Sekel created this Life Tributes page to make it easy to share your memories.

Age 83, of Verona, passed away on Sunday, September...

Send flowers to the Sekel family.