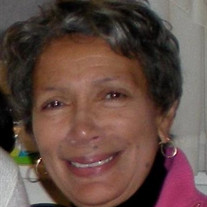 Margaret Cassandra Chapman Pannell August 22, 2020 Jesus gave us a new commandment that said "by this sign everyone will know that you are My disciples, if you love one another." Margaret Cassandra , affectionally known as Cassie, Candy, Mom and Grandma, was a loving generous mother, sister, relative and friend who was dedicated to support her family. Margaret Cassandra, daughter of Carlton Chapman and Gwendolyn Hairston Chapman was born on March 19, 1947 in Pittsburgh, PA. She was the oldest of three children and graduated from Fifth Avenue High School in Pittsburgh, Pennsylvania. She was married to the late Edgar (Eddie) Williams and the parent of son Johnny and daughter Tonya. She later married Greg Pannell with a blissful marriage until his death. Those at their wedding remember the loving song that the groom sang to his bride. She prepared for her career by graduating from Community College of Allegheny County School of Nursing and worked as a registered nurse at several venues in the greater Pittsburgh area. Her last employment was assistant to Dr. Yee Chung Ho, MD, a well-respected physician in the greater Pittsburgh area. Many of her patients were senior citizens and they looked forward to going for treatment, knowing that her presence was palpable and full of genuine good. She was known for her concern and compassion for the patients' well-being and clearly answered their questions. After her retirement, Dr. Ho would continue to contact her for advice and assistance. As an act of her love and compassion after her retirement, she served as the caregiver to her mother; making her final days on this cooling cinder peaceful. Margaret Cassandra departed this life in her own home with her daughter Tonya and son Johnny being her caregivers. Thus proving Blessings crown the head of the righteous: Proverb 10:6. She will be greatly missed by her sister Carolyn Shealey (George aka Pokey), brother Karlton Chapman, children John Chapman and Tonya Williams (Keith), seven grandchildren: Cassaundra, Cynthia, John, Alona, John, Victor and Katie May, three great grandchildren: King, Azari, Titan, a host of relatives including her beloved Uncle Robert Harper and many close friends. She was a person that everyone who knew her loved her and was warmly touched by her eternal smile, warmth and generosity. She will be remembered with profound affections. Her love and memory will remain in our hearts and spirits forever, knowing that she is in a better and peaceful place.

Margaret Cassandra Chapman Pannell August 22, 2020 Jesus gave us a new commandment that said "by this sign everyone will know that you are My disciples, if you love one another." Margaret Cassandra , affectionally known as Cassie, Candy,... View Obituary & Service Information

The family of Margaret C. Pannell created this Life Tributes page to make it easy to share your memories.