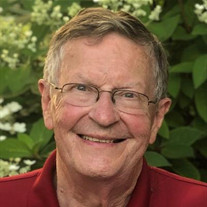 John Alan Pickett Age 92 ½ of Longwood at Oakmont, formerly of O'Hara Township on Tuesday, December 29, 2020. Beloved husband for 69 ½ years to Wilberta Naden Pickett; loving father to Mary Wilson (Paul) of Daytona Beach, FL, Alan Pickett (Donna) of Cold Spring, KY, Sabra Shoemake (Charlie) of San Francisco, Judy Wagner (Bob) of Wexford, PA and Louise Pickett of Cranberry Township, PA. He is the loving grandfather of 14 grandchildren and 16 great grandchildren. John was born in Greentown, Indiana, son of Hanley and Vetta Pickett. He attended Earlham College in Richmond, IN and graduated from Indiana University in Bloomington, with a Bachelor of Science Degree in Business with an Accounting major. John served in the U S Army during the Korean War. Employment included 3 years with AVCO Corp in Richmond, IN, thirteen years with St Regis Paper Co in Richmond, IN, Cleveland, OH and Pittsburgh, PA and 23 years with Westinghouse Electric Corp in Pittsburgh. John retired in 1992 from the position of Director, Computer Systems Acquisition at Westinghouse. In all his work life, he was known for his personal interest in both his colleagues and those working for him. He had a solid work ethic, was trustworthy and dependable. He was a man of integrity who always wanted to do his best for others. John spent nearly 10 years as a Ruling Elder in Presbyterian Churches, most recently at Fox Chapel Presbyterian Church where he also served as Treasurer and Controller, and sang tenor in the church choir. John achieved the status of Emeritus Life Associate in the National Association of Accountants. John served as both a Docent and Board Member at the George Westinghouse Museum in Wilmerding and as a Board Member of the Pittsburgh Concert Chorale. He became a Bronze Life Master in the American Contract Bridge League. For many years, John was an O'Hara Township Auditor. He also served 9 years as a member of the Resource Management Committee to the Board of the Fox Chapel Area School District. Beginning in 2004 John has served as Financial Advisor to Calvert Memorial Presbyterian Church in Etna, preparing its financial and tax statements and serving on the Administrative Commission that oversees the church's ministry. At Longwood. he served as Assistant Treasurer on the Resident Council. John and Wilberta enjoyed their many travels through 44 of the continental United States and many European nations. Many trips included rail journeys to cater to John's special interest in the railroad industry. John and Wilberta enjoyed three trips overseas with choral groups: the Pittsburgh Concert Chorale tour of England and Wales; the Columbia Chorale (Vancouver, Washington) tour of Italy; and the Pittsburgh Oratorio Society tour of Spain. John's family was important to him, and he was a loving role model for his five children. Because his wife was working, he saw shared home responsibilities with her as a team effort. He was a sweet, kind and thoughtful man with a good sense of humor who will be dearly missed. The family wishes to thank Family Hospice for their remarkable, compassionate care. Private interment at the Fox Chapel Presbyterian Church's columbarium will be followed by a public memorial service at a date to be determined. Memorial donations may be made to the Music Ministry of the Fox Chapel Presbyterian Church, 384 Fox Chapel Road, Pittsburgh, PA 15238, or Bread of Life Food Pantry, Calvert Memorial Church, 94 Locust Street, Etna, PA 15223.

The family of John A. Pickett created this Life Tributes page to make it easy to share your memories.

Send flowers to the Pickett family.