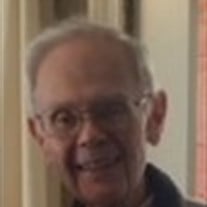 John T. Eld of McCandless age 79, died March 15, 2022 of Lymphoma. John was the devoted son of Myron and Helen Eld, beloved husband of Mary for 48 years, caring brother-in-law of Clara (late, Leo) Saternos, John F.(late, Marilyn) Leo, and late, Sam Leo. He is survived by numerous cousins, nieces, nephews, grandnieces, grandnephews, and devoted friends and neighbors. John, a North Allegheny graduate, was a radio announcer at WJAS, KQV, and WKJF. He served four years as assistant to County Commissioner Dr. William Hunt. Later he taught wine and food classes at Community College, and occasionally at Northland, Shaler, Hampton, and Northern Tier Libraries. He was a valued member of the Pittsbugh American Wine Society and served for a time as chairman and vice-chairman. He also was a member of the Media Boys Club and of the North Hills Historic Auto Club. Internment is private and a memorial gathering will be announced later. On John's behalf the family thanks all in our family, our family of friends, and the medical community who cared for him. Contributions may be made to Hillman Cancer center at Passavant Hospital.

The family of John T. Eld created this Life Tributes page to make it easy to share your memories.

Send flowers to the Eld family.