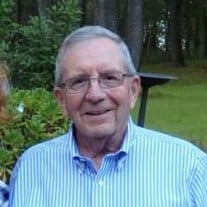 John "Jack" "Pap" Mathias Dohmen Age 88, died peacefully at home on October 2, 2020, after a 4 year battle with dementia. He was born to John J. and Florence (Gift) Dohmen and lived his whole life in Upper Burrell. Jack was a graduate of Ken Hi. He proudly served in the Army as a military policeman, where he was honorably discharged. Jack was a hard worker and held many jobs over his lifetime. In his early years he was employed as a glass-cutter for American Window Glass Co. (Jeannette Glass). He then found his love of being on the road. He was an independent trucker for years, and drove for numerous companies until becoming employed by Air Products as an over-the-road driver and retired from there after many years of service. The road was calling, and not one to sit idle, he took a job driving for NEP. This job would take him to exciting events such as Steeler football games with field access and to the Victoria Secret Fashion Show with back-stage access. We got a phone call for that one, "guess where I'm at" and "they are wearing wings!". Jack just loved to be going somewhere and helping out. He was an excellent skier and he taught his grandchildren how to ski, and skied into his 70's. He was a life-active member of the Upper Burrell Fire Department Station 115 and at one time was Chief. He enjoyed taking trips with his sister Sal and one of his favorites was when they drove to Alaska and back. Pap, as most people called him, always had an open door and a place to live for anyone that needed it. He touched the lives of so many with his kindness and generosity. His greatest accomplishment was raising his children and he loved nothing more than spending time with his kids, grandchildren, and great-grandchildren. Family came first. A tremendous thank you to Mary Lou (Nan) Stuchel who has become part of our family and all of his other caregivers, friends, and family for taking such good care of him and making it possible for him to stay at home, where he wanted to be. He was the loving father to Sue Gromley and John C. (Diana) Dohmen. Proud grandfather to Jared (Danielle) Dohmen, Justin (Jamie) Gromley, Robert (Nikki Shoemaker) Gromley, and Aleace (Rick) Mathews. Great-grandchildren Tyler Kubisa, Abby and Jase Dohmen, Jake Cummings and Jagger Gromley, Landon Shoemaker, Macy and Jack Mathews. He is also survived by his sister, Sarah (Sal) Yohe. He was preceded in death by his parents; and his two brothers, Willam Dohmen and Richard (Joanne) Dohmen. As per his wishes, there will be no public services. The family will hold a celebration of life at a later date. Although he has taken his last ride, he will always be in our hearts. We will miss our "Pap" dearly and find comfort knowing he is now at peace. One of his favorite things to do was to take a family member or friend to dinner. We ask that in his memory you consider paying it forward by treating someone to a meal. Time spent together is priceless. And as he would say to you when you were leaving "don't hurt nobody".

John "Jack" "Pap" Mathias Dohmen Age 88, died peacefully at home on October 2, 2020, after a 4 year battle with dementia. He was born to John J. and Florence (Gift) Dohmen and lived his whole life in Upper Burrell. Jack was a graduate of... View Obituary & Service Information

The family of John M. Dohmen created this Life Tributes page to make it easy to share your memories.