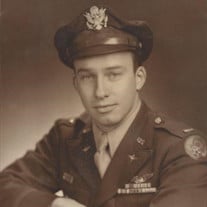 James Glasgow (JC) Weir 1920-2020 Jim (JC) Weir passed away peacefully at Longwood at Oakmont in Pittsburgh on August 10, 2020 at the age of 99+. He is survived by his wife of 72 years, Ruth Servais Weir. They had 5 children, George, Peg, Will (deceased), Bob and Jane. They have 9 grandchildren; and 3 great-grandchildren. Jim was born in Pittsburgh Oct 26, 1920 to Wilson Speer and Anna Aylesworth Weir, he had an older sister Jane who married Bob Hutchison. He has been cremated; there will be no visitation at this time. There will be a life celebration (wake) at Greenwood Cemetery at a future date (after Covid). Many of you know what to expect. Condolences and remembrances for Ruth and family can be sent by mail or email c/o George Weir, 612 8th St., Oakmont, PA. Email [email protected] Facebook: greenwood cemetery- o'hara township, pa. Jim lived an amazing life!! After Pearl Harbor, he enlisted at age 21 and became a P47 fighter pilot in the Pacific (Saipan and IE Shima). He was a bold and skilled pilot with one Japanese Val dive bomber to his credit. His 19th FS members were his best friends. He organized reunions starting in the 1970s for over 30 years. In addition he had smaller reunions at his cottage in Canada for nearly 20 years. His sons were eventually invited and had the blessing of knowing these heroes and listening to their stories, a true gift to all of us. Jim met Ruth (Swarthmore, PA) in 1947 and they married and settled in Pittsburgh. Jim worked as an insurance agent and they had 5 children. In 1959, after 5 years in Charleston WV, they returned to Pittsburgh. Jim managed (and lived at) Greenwood Cemetery while keeping his insurance job. That same year, he got a third job with the Pirates in security. For the children, growing up in the cemetery was a wonderful experience with Ruth teaching about history and nature and Jim providing summer jobs cutting grass. Many of you reading this have fond memories of Greenwood Days. Jim's job with the Pirates (and Steelers) provided opportunities to see games in the 60s and 70s, a great time to be a Pittsburgh fan. Also in 1959, Jim's deceased uncle's property in Canada was released from probate and he built a cottage there on the Severn River. This wonderful place has been a destination for family and friends for 60 years. In the 90s he bought a mobile home in Florida where we all spent warm winter days. He made friends everywhere he went and those friendships lasted a lifetime. Jim was an outstanding photographer, he has great movies and pictures from his WWII service. He took Christmas photos in the 50s with dark room development. He always cataloged these photos and movies and upgraded to new technologies. He was an artist and did nose art on the planes of the 19th Fighter Squadron. He was a builder, a fix it guy, a cook, it seemed he could do anything. He loved cars and was a great driver. He was the hardest working man we've ever known, a legend. The memories and stories are endless, we will share them at the wake. See you there.

The family of James Glasgow Weir created this Life Tributes page to make it easy to share your memories.

Send flowers to the Weir family.