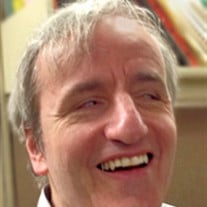 Gilbert John Busch was born in Pittsburgh, Pennsylvania on January 24, 1953 to Marie and Gilbert Busch. He attended the Western Pennsylvania School for Blind Children and obtained a degree from Computer Systems Institute. Gil worked as a braille proofreader in Boston for 28 years and then moved to Alexandria Virginia to become a braille music specialist at the Library of Congress. He loved to travel and went to Europe twice with friends and once on an organ study tour. He kayaked in the Canary Islands and also enjoyed sailing. He was a member of Ski for Light and loved cross country skiing and snow shoeing. But Gil's expertise in music was exceptional. He played piano and organ, could listen to a piece and transpose it into any key, could arrange a song after only hearing it a couple times. He played piano for three ballet schools when he lived in the Boston area and was a church organist and choir director there. Of course, his classical music listening was extensive. He attended Mahlerfests in Colorado and delighted in discussing any composer or artist including since varied musicians as the Beatles, Joni Mitchell and Art Tatum. Gil grew up in the Catholic tradition but switched churches in the 1980's. He attended Bush Hill church for eleven years and was ordained as an elder and a deacon. He attended Sunday school regularly as well as Bible study and even in his last days wanted to still be a part of the men's group. Gil is survived by his wife Lisa Busch and stepdaughter Jackie DiMare as well as nephews Jacky and Tim Wolfe and their families. His parents, two brothers and a sister preceded him in death. Gil and Lisa were married for 16-1/2 years and shared many similar interests. They created a CD of original compositions, attended concerts, sang in choirs, went on a Caribbean cruise and did a lot of laughing and singing together. Gil contributed a lot to the world: his music, his puns and wordplay, his gentle caring, his beautiful bass voice, his knowledge that enhanced the lives of many library patrons. Though hounded by Parkinson's and a brain tumor, Gil rarely complained, almost never missed work and kept his sense of humor. He did not see himself as someone who persevered, but he certainly did. Lastly, Gil was an archivist, recording practically every event he participated in even when it came to screams from unsuspecting friends on a rollercoaster, many cab drivers' conversations and time with his family and friends. He loved it all as treasures to keep, adding to the memories we will never forget.

Gilbert John Busch was born in Pittsburgh, Pennsylvania on January 24, 1953 to Marie and Gilbert Busch. He attended the Western Pennsylvania School for Blind Children and obtained a degree from Computer Systems Institute. Gil worked as a braille... View Obituary & Service Information

The family of Gilbert J. Busch created this Life Tributes page to make it easy to share your memories.

Gilbert John Busch was born in Pittsburgh, Pennsylvania on January...

Send flowers to the Busch family.