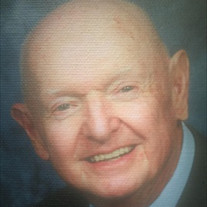 Franklin Eugene Young was a man of great vision and faith with a servant's heart. He died at his home Tuesday, June 2, 2020. Frank was born in Mahaffey, PA in 1929. Growing up as one of 6 children on a farm instilled a strong work ethic, that he carried with him his whole life. After 4 years in the Navy, Frank married the love of his life, Patricia, in 1956. His successful career as an electronic engineer took the family on many moving adventures. Pat and Frank enjoyed showing their map of all the places they lived, traversing six states and over 24 homes. The highlight of Franks career included the "President's Award" from American Standard in 1980. The award recognized his role in research and development to advance technology for the railroads. Simply put, Frank's team got rid of the caboose. Following his retirement from Union Switch and Signal, Frank went back to work part time at Carnegie Mellon University and Baker Hughes. His desire to develop advancements in transportation, included various patents for Maglev. In the late nineties Frank retired again, but continued to work by serving churches in leadership roles and music. He and Pat often participated in piano and organ duets. He also enjoyed filling his time with building furniture from re-purposed wood, doors and even shutters. But his greatest joy, was his family. He loved them fiercely! He was proceeded in death by his mother, Lina; and father, Bruce; his sister, Carolyn; and his brothers, Reed and Wendel. He is survived by his younger brothers, Bruce and John; his wife, Patricia; and their four children, his oldest son Steve, Liz and her husband Frank, Carolyn and her husband, Brian, Frank Jr. and his wife, Angelica; granddaughters, Katie, Chelsea, Stephanie and her husband, Jeremy, Alyssa and her husband, Andrew; and his six great-grandchildren, Seth, Olivia, Leah, Summer, Callie and Summer. Not to mention the many friends who through the years have become family. A small memorial service will be held at Holiday Park United Methodist on Tuesday, June 9, 2020 at 11am. It will also be streamed via zoom. To receive a link to the service please email [email protected] with your contact information.

Franklin Eugene Young was a man of great vision and faith with a servant's heart. He died at his home Tuesday, June 2, 2020. Frank was born in Mahaffey, PA in 1929. Growing up as one of 6 children on a farm instilled a strong work ethic,... View Obituary & Service Information

The family of Franklin E. Young created this Life Tributes page to make it easy to share your memories.

Franklin Eugene Young was a man of great vision and faith with...

Send flowers to the Young family.