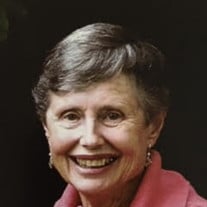 Frances C. Hardie August 5, 1932-November 8, 2019 Frances C. Hardie died peacefully on November 8, 2019. A longtime resident of Fox Chapel, she spent the last year as a resident of Longwood at Oakmont. She was born in New York City, the daughter of Mr. H. Pelham and Mrs. Helen K. Curtis and spent much of her childhood in New Canaan, Connecticut. Frances was a 1954 graduate of Radcliffe College and went on to earn a Master of Library Science degree from Carnegie Mellon University ("CMU"). She married James H. Hardie, who predeceased her in 2018; Mr. Hardie was a prominent Pittsburgh attorney. The mother of five children, Frances worked for many years as a librarian at the Hunt Library of CMU. At the conclusion of her career as a librarian, she turned her attention to writing. She published separate books on the histories of the Borough of Fox Chapel, Sewickley, Edgewood and The Papercraft Corporation, respectively. Frances also brought her love of history to the Pittsburgh community and Western Pennsylvania by leading walking tours of the region. These were always well attended by a loyal group of history enthusiasts. A lifelong piano player, Frances also served for several years as a trustee for Gateway to Music. She was a passionate outdoors person. She started skiing at a very early age and enjoyed teaching her husband and children the finer points of this sport. Indeed, the Hardie family frequently went on ski trips to all parts of North America. In addition, she was a tenacious tennis player. Finally, she spearheaded camping, canoeing, hiking and similar family excursions throughout North America and points beyond. She was portrayed in a "Life Magazine" article in 1952 on a winter ski and camping trip at Tuckerman's Ravine on Mount Washington. She also traveled to Africa, Peru, Mexico and points beyond. She was always accompanied by either members of her family, close friends or both. While at home Frances was never far from one of her many well loved dogs or horses. Frances was predeceased by her youngest daughter, Rachel Share, as well as brothers F. Kingsbury Curtis and John P. Curtis. She is survived by her sister Anne P. Curtis of New Haven, CT., sons Hiller and Andy of Pittsburgh, son Michael and daughter Janet (Harvey) of Baltimore, ten grandchildren and one great grandchild. A memorial service will be held at the Fox Chapel Golf Club at 11:30 on January 11, 2020, and requests that gifts in her honor be directed to Beechwood Farms Nature Reserve.

The family of Frances Hardie created this Life Tributes page to make it easy to share your memories.

Send flowers to the Hardie family.