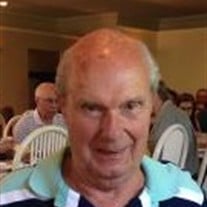 The M Factor closed up shop today, after more than 60 years of unflinching service to anyone who needed help. "He could fix anything" is how he was spoken of by all who knew him. M Factor hallmarks included his unlimited patience, friendliness, care for others and extraordinary mechanical aptitude. Edward G. (Eddie George) McLaughlin passed away peacefully Saturday, May 1, 2021, after a brief illness. He was 88. He is survived by his wife of 65 years Claudia (Polosky) and 4 children, Faith (Tom) Herrington, Ed (Beth) McLaughlin, Tim (Lisa) McLaughlin and Ken McLaughlin; 13 grandchildren, Heather (Carl), Mike (Ashley), Dan (Brittany), Rachel (Josh), Dave (Kristy) Steve, Nick, Megan (Mike), Kevin, Matt, Leo, Molly and Marcus. Ed and Claudia also love 7 great-grandchildren, Jaxon, Xander, Ronan, Wylder, Cambria, Kennedy and Payton. Also survived by his brother, Bob and wife Sally who reside in Tempe Arizona. He is also loved by a multitude of nieces and nephews. For 40 years Dad blessed the railroad industry and Union Switch and Signal with uncommon intelligence, creativity, and work ethic, eventually earning the position of Director of Quality Assurance. During his tenure at "The Switch", he traveled the world and worked domestically on Chicago's "Loop", NYC Transit "MTA", San Francisco's "BART" and more. Dad had many patents, contractually submitted through USandS. As a father, Dad shared in the interests of each of his children, science, music, sports, camping, hunting, canoeing and racing. He especially loved going to Indy in May, usually for the Time Trials. After the children were raised, and called by the company, Ed and Claudia moved to Columbia, South Carolina, where Dad realized his lifelong dream of learning to fly. Mom and Dad shared the tremendous challenge of VFR certification, both earning pilot licenses. They loved flying together, eventually home to Pittsburgh. His hobbies included concrete, clocks, computers, auto repair, and upgrading his kid's homes. After retirement, Mom and Dad returned to their Penn Hills home, where they enjoyed more than 20 years together. Heaven must have needed lots of stuff fixed, so God called home his specialist. We will miss him greatly. In lieu of flowers, the family suggests donations to Samaritan's Purse, Compassion International, or your local animal shelter. Private family service to be held at a future date.

The M Factor closed up shop today, after more than 60 years of unflinching service to anyone who needed help. "He could fix anything" is how he was spoken of by all who knew him. M Factor hallmarks included his unlimited patience, friendliness,... View Obituary & Service Information

The family of Edward G. McLaughlin created this Life Tributes page to make it easy to share your memories.

The M Factor closed up shop today, after more than 60 years of...

Send flowers to the McLaughlin family.