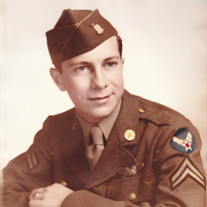 Donald Van Inwegen 1925 - 2020 Husband, Hero, Father, Friend "The Quiet Giant" Donald Earl Van Inwegen of Gibsonia, PA passed away May 9th, 2020. He was the son of the late Earl W. Van Inwegen and the late Helen V. (Hickman) Van Inwegen. He was preceded in death by one sister, the late Shirley J. Tippett. Donald was the husband of the late Marjorie J. (Opel) Van Inwegen who he was married to for 64 years. He is survived by his eldest son Richard Van Inwegen of Rogersville, TN, son Bruce Van Inwegen of Chicago, and daughter Barbara Van Inwegen of Pittsburgh, PA. He is also survived by grandson, Max Van Inwegen of Madison, Wi and several nieces and nephews. It would be easy to dismiss Don at first glance, but that would be a mistake. His small stature easily concealed the toughness of spirit, and the size of the kindness, living in the heart of this man. As a member of the Greatest Generation, Don's spirit was tested and tempered at the early age of 20, while earning among other decorations, the Distinguished Flying Cross. He successfully completed over 20 long-range missions as a tail-gunner on a B-29 Superfortress flying off Tinian Island in the Pacific. Few others outside family members and fellow veterans were ever aware of that. He was quiet about those sorts of things. It was understood by the few who heard the stories of his days in the Pacific, that he regarded those events as dangerous truths that were in front of him, to be dealt with one-by-one, and moved beyond. This was someone who understood early in life, that it is less important to be loud now, than it is to be true to the future, and to behave that way now. After his service in the war, Don earned a degree in Metallurgical Engineering and secured an entry-level research position in the booming post-war steel manufacturing industry. After decades of hard work and rising high up in the traditional corporate structure, in a moment, Don remembered something different about what it means to seek titles. --- And he had new ideas. In 1984, Don abandoned his traditional corporate path, and with the help of his wife Margorie, established a unique idea that they named Roll Services, Inc. As entrepreneurs they continued to service the steel industry, creating their own path to retirement. Along his way, Don encountered cancer and heart disease. These adversaries had no chance against a spirit such as his. He met each with a clear-eyed passion for life. And defeated them. All his life, Don strived for what precision meant, but also understood the limits of that idea, and how to listen to the wild, and unpredictable call of creativity. He was a gardener early, teaching his children how to weed the process. He took up oil painting for a time, and then in later life, became passionate about creating stained glass objects. In his 90's, Don discovered woodcarving, and pursued its mysteries until his death. Donald Van Inwegen was a man unafraid of challenges. He fought those challenges quietly, a Thomas Babbington Macaulay and lived as long as he desired. In ancient Rome there was a soldier named Horatius, who defended the last bridge into Rome against the entire Etruscan army. He was acknowledged in the poetry of Thomas Babbington Macaulay, when he wrote of that encounter in "The Lays of Ancient Rome" Then out spake brave Horatius, The captain of the gate: "To every man upon this earth. death cometh soon or late. And how can man die better than facing fearful odds, for the ashes of his fathers, and the temples of his gods?" Private burial will be held in Kittanning, PA. Family suggests donations to the SHARE Foundation P.O. Box 400, Rolling Prairie, IN 46351.

The family of Donald E. Van Inwegen created this Life Tributes page to make it easy to share your memories.