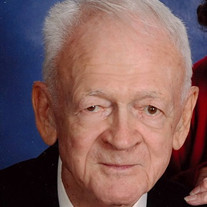 Long before the term "The Greatest Generation" was coined, Donald Gasper lied about his age for the chance to serve his country. He was only seventeen when, in the small Pennsylvania mining town of Sykesville, Don convinced recruiters he was of legal age. He later forged his father's signature and enlisted. Known as "Dingo" in the community where everyone had a nickname, one of Don's earliest memories was during Prohibition. He was only four years old when, with a pocket full of cash from his mother, he paid a bootlegging neighbor and carried home bags of alcohol to be served at his sister's wedding reception. The 92-year old, who was a resident of O'Hara Township, died peacefully at home on July 7 of natural causes. The son of Slovakian immigrants, Don learned English in elementary school and would make education a priority throughout his life. He graduated with both a B.S. in Geology and a Master of Science from Pennsylvania State College, which later became Penn State University. With an impressive master's thesis about the coal country where he was raised as the son of a coal miner, Don went on to a lifelong career with the Consolidation Coal Company (now CONSOL Energy), retiring in 1985 as Director, Economic Studies and Government Affairs. Don's military service included Navy pilot training in Pennsylvania, with advanced training in Tennessee and Iowa. World War II ended before he could be deployed. He was a member of the Air Force Reserve for three years during the Korean War. After retirement, Don and his wife traveled the world to continue his quest for knowledge. He visited all 50 states and 26 countries across 5 continents and took pride in being an amateur photographer throughout his travels. He took pilgrimage trips to Lourdes, Fatima and the Holy Land and was twice privileged to be in a papal audience. Don was fascinated by meteorology and botany and found great enjoyment in the simplicity of nature, such as cutting grass and nurturing plants and trees. He devoted countless hours to serving the church community of St. Edward's (now St. Pio Parish in Blawnox) and nurturing his adoring family. Don was preceded in death by his wife of 63 years, his beloved Dorothy. He is survived by daughters, Barbara Gasper, Teri (Tom) Keith, DeeDee (Phil) Dorenkott and Karla (Gary) Enzweiler; grandchildren, Brandon and Lindsey Dorenkott, Bobby and A.J. Hauer; and step- granddaughter, Caroline Keith Fitzgerald. Funeral arrangements were private. Donations may be made to Aspinwall Meals on Wheels or EWTN.

Long before the term "The Greatest Generation" was coined, Donald Gasper lied about his age for the chance to serve his country. He was only seventeen when, in the small Pennsylvania mining town of Sykesville, Don convinced recruiters he was... View Obituary & Service Information

The family of Donald Gasper created this Life Tributes page to make it easy to share your memories.

Long before the term &quot;The Greatest Generation&quot; was coined, Donald...

Send flowers to the Gasper family.