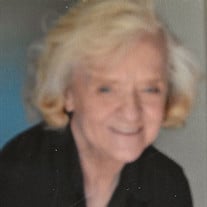 Dolores Frances Wagner Age 88, passed away on November 20, 2020 after a prolonged illness. Born March 16, 1932 in Indiana Township, she was the daughter of the late Philip and Clara (Gloss) Newcamp. She attended Etna High School and sang in the choir and operettas, was a majorette and on the tumbling team before graduating in 1950. She married Bernard Wagner on August 18, 1951 and raised four sons. In 1978, Dolores and Bernard moved to California where she lived for 32 years before returning to the Pittsburgh area in 2010. Her health declined after returning to Pittsburgh and she spent the last years of her life in assisted living. Dolores was a loving wife and mother who canned fruits from yard's trees, grew vegetables, and enjoyed baking and blackjack. She reentered the work force in the late '70s to help send her sons to college. She was often selfless with her desires, focusing on keeping her family happy. She was also industrious and could cut hair, fix broken items, and in her 70's, replaced a broken garbage disposal on her own. She was preceded in death by her beloved husband, Bernard, and her son, Keith Wagner. She was also preceded in death by two sisters, Clara Gaughan and Catherine Hohman: and three brothers, William Newcamp, Charles Newcamp, and George Newcamp. Dolores is survived by three of her sons (Tom, Dale and Ron Wagner) and two sisters (Mary Grace Gubanic and Dorothy Hartman). She had six grandchildren (Owen, Jaqueline, Adrienne, Cory, Ariana, and Katie Wagner) and three great-grandchildren (Malcolm, Isla and Sam Wagner). Her love and kindness will be sorely missed. Due to the COVID pandemic, the burial was performed in a private ceremony at St. Mary's Parish Cemetery (Sharpsburg) where she shares her final resting place with her husband Bernard. A memorial event will occur next summer when distant family will be able to honor her memory.

Dolores Frances Wagner Age 88, passed away on November 20, 2020 after a prolonged illness. Born March 16, 1932 in Indiana Township, she was the daughter of the late Philip and Clara (Gloss) Newcamp. She attended Etna High School and sang in... View Obituary & Service Information

The family of Dolores F. Wagner created this Life Tributes page to make it easy to share your memories.

Send flowers to the Wagner family.