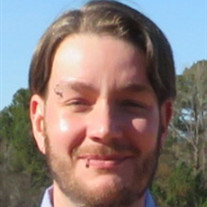 DeWayne L. (Charlie) Holloway, Jr. Departed this life unexpectedly March 17, 2020 at the home he shared with his fiancée. Born April 9, 1980 in New Kensington, Pa to his father, DeWayne L. Holloway; and mother, Theresa L. McKinney Moroff, DeWayne was a 1998 graduate of Springdale High School. DeWayne also earned a degree in Sound Engineering from the Recording Workshop in Chillicothe Oh and an associate degree in Information Technology Computer Network Systems from ITT Technical School, graduating with Highest Honors and as a member of the Technical National Honor Society on April 3, 2014. He was an avid sports fan, watching anything that he could find and was loyal to his hometown Pittsburgh Teams. He was a diehard fan of the Pittsburgh Penguins and went to several games yearly. He was also an avid soccer fan, spending the past 6 years as a season ticket holder of the Pittsburgh Riverhounds Soccer Club. You could always spot him in the top row of the Paul Child Stand Supporter Section passionately cheering on his team and booing the refs. He recently went to his first NBA game in Cleveland and was looking forward to attending many more. From a young age he bucked the hometown trend and was a San Francisco Giants Fan. He never would have imagined in his youth that he would get to cheer on his Brother in Law and watch him become a World Series winner. He truly loved to watch him pitch. He was also passionate about music, playing in his younger days and listening in his older days. He often would joke that he would see more concerts and shows in a year than most people would see in a lifetime, always with his constant companion Ann by his side. He enjoyed getting away when the weekends would allow for it and would head up to the family camp to ride the trails with his friends in his side by side. He enjoyed collecting Funko Pops, Star Wars Memorabilia and playing video games with his nephew Ryder. He has been employed for the last 7 years by Evolution E-Cycling, LLC located on Pittsburgh's Southside, where he managed the IT Asset Refurbishment and Remarketing Branch, playing an instrumental role in getting the company up and running off the ground. There was never a more kind or gentle soul, a true friend to all who had the privilege of meeting him He is survived by his mother, Theresa L. McKinney Moroff of Springdale; sister, Erica L. Holloway of Springdale; sister, Nicole Vogelsong; and brother-in-law, Ryan Vogelsong; and nephew, Ryder Vogelsong, all of Suwanee, Georgia. He is also survived by many special uncles, aunts and cousins, that he loved spending time with. He is also survived by his fiancée, Ann M. Copeland, with whom he had made his home for the past 7 years. He is missed terribly by his 2 furry best friends and fur babies, Tubby and Fiona Apple. He was proceeded in death by his father, DeWayne L. Holloway; paternal grandparents, James and Georgetta Holloway; and maternal grandmother, Dorothy M. McKinney, who gave him the loving nickname, Charlie Brown, which he carried proudly his entire life. A memorial service will follow once the world has slowed down and the Covid-19 restrictions have been lifted. In lieu of flowers, please make all memorial contributions to the Mario Lemieux Foundation.

The family of DeWayne L. Holloway, Jr. created this Life Tributes page to make it easy to share your memories.