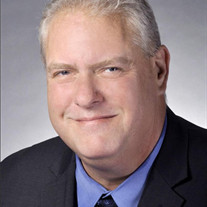 Curtis J. Constant, 62, of Whitehall, passed peacefully on Wednesday, November 17, 2021, surrounded by loved ones at Mercy Hospital after a brief, but courageous battle with cancer. He was born in Harrison Township, PA, on March 27, 1959, to the late Conrad and Kay Lewis Constant. Curtis was a 1977 graduate of Springdale High School. He received his BA in Psychology from Slippery Rock University and his MA in Counseling Education from Indiana University of Pennsylvania. Since 1983, Curtis worked for the Pittsburgh Mercy Health System, most recently for the Intellectual Disabilities Services division. He was very passionate about being a healing force within the communities that he served. An avid sports enthusiast, Curtis loved to collect Pittsburgh sports memorabilia. He also enjoyed rock music and shared this love with his daughter, Sarah. They enjoyed traveling together to see The Decemberists in concert. He loved spending time with his cat, Betsy, and "granddog" Mila. Curtis is survived by his only daughter, Sarah Jayne Constant, of Whitehall and her mother Lois (Matt) Willson of Castle Shannon; Col. Douglas (Reshi) Constant, of Haslet, TX; Tracy (Frank Pittinaro) Yaksich, of Gibsonia; Terri (Keith) Farrell, of Springdale; plus nieces Samantha Constant, Victoria (Chip) Harber, Kristina Constant, Courtney Yaksich and Ashley Farrell; nephews Luke Yaksich and Travis (Naomi Bertram) Farrell; and great nephew Conrad Harber. He was preceded in death by his parents and his brother Dennis. The family would like to thank the doctors, nurses and staff at Mercy Hospital. A private celebration of life, including a mass, will be held at a future date. In lieu of flowers, donations can be made to Pittsburgh Mercy's Operation Safety Net. This is an organization that meant a lot to both Curtis and Sarah. Checks should be made out to 'Pittsburgh Mercy' and sent to: Pittsburgh Mercy Operation Safety Net Curtis J. Constant Memorial Fund Pittsburgh Mercy Development Office 1200 Reedsdale Street Pittsburgh, PA 15233-2109

Curtis J. Constant, 62, of Whitehall, passed peacefully on Wednesday, November 17, 2021, surrounded by loved ones at Mercy Hospital after a brief, but courageous battle with cancer. He was born in Harrison Township, PA, on March 27, 1959, to... View Obituary & Service Information

The family of Curtis J. Constant created this Life Tributes page to make it easy to share your memories.

Send flowers to the Constant family.