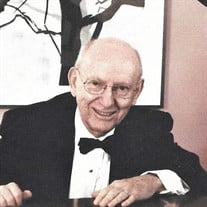 Clark Bedford Born April 12,1934, went home to be with his Lord on the 7th of October, 2019. He was devoted to his God, his family and music. Clark was husband to Sandra for nearly 60 years and father of Christopher and Timothy; grandfather of Danielle, Holly, Alex, Ian and Zola. They all sat on his lap at the grand piano when they were infants. They were all very precious to him. His greatest accomplishment in life was his kindness and generosity to those around him. His musical talents were evident at a young age. He was playing the organ for church and weddings at the age of 15 and he wrote and produced his High School Musical. Clark had a Bachelor and Masters degree from the University of Michigan where he was also the accompanist for the U. of M. Men's Glee Club. He served in the U.S Army in Special Services, directing and performing in productions for enlisted men as well as at the Officer's Club. He went on to NYC where he took special studies at The Juilliard School of Music. Bedford was Organist-Choirmaster of a large Manhattan Church, taught at Nyack College, and an accompanist at the Mannes School of Music as well as for several opera singers. In 1965, Bedford went to London to become the organist-choirmaster of the famous All Souls Church under The Dr. Rev. John Stott. During their time there, The Bedford's had the privilege of attending the Queen's Garden Party at Buckingham Palace. Clark conducted The City Singers in the financial district of London. His sons, Christopher and Timothy were both born in London. While in London, he began working part-time with the Welsh National Opera and in 1971, moved to Cardiff to be full-time with the Opera as conductor-repetiteur. Clark and his family returned to the States in 1973 where he taught in the Music Department at Taylor University, then moved to Pittsburgh in 1979. He has been organist-choirmaster for several large churches, was accompanist for Mildred Miller in the opera workshop at Carnegie Mellon, and has accompanied many singers including Mariann Cornetti, who said he "was the singer's dream" because of his ability to transpose anything. Bedford founded the Pittsburgh Concert Chorale in 1985 and conducted it for 23 years. He was honored for this contribution to the city with an Honorary Doctorate from LaRoche College in 1998. As a boy, his favorite singer was Frank Sinatra. When Sinatra was in Pittsburgh for his last performance, Clark played at the William Penn for his private dinner party. Mr. Sinatra came up to him and said, "What you do with that instrument is wonderful." A memorial service will be held at 11am on Saturday, October 12, 2019 at Christ Church Fox Chapel, 630 Squaw Run Road E., Pittsburgh, PA 15238. Donations may be made to The Pittsburgh Concert Chorale or the Salvation Army.

Clark Bedford Born April 12,1934, went home to be with his Lord on the 7th of October, 2019. He was devoted to his God, his family and music. Clark was husband to Sandra for nearly 60 years and father of Christopher and Timothy; grandfather... View Obituary & Service Information

The family of Clark Wesley Bedford created this Life Tributes page to make it easy to share your memories.

Send flowers to the Bedford family.