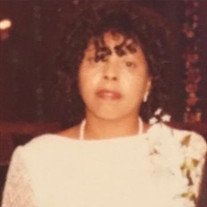 Carrie L. (Connie) Lockridge Pennington was the oldest daughter born to the late Roland and Louise (Medley) Lockridge on March 25,1942 in Anjean, West Virginia . She went home to be with the Lord on March 4, 2021 in Penn Hills, PA. Connie was a longtime resident of the Pittsburgh area. On November 18, 1961, Connie married James Pennington, Jr. To this union one daughter, Kimberly A Pennington, was born. James Pennington, Jr. proceeded Connie in death in 1997 after 36 years of marriage. Connie accepted Christ at an early age and was a member of Mt. Rise Baptist Church of New Homestead, PA. She served several offices from Sunday school to Financial Secretary. She was the co-founder of the youth choir, the Risettes. Connie was a member of Living Waters International Ministries of Clairton, PA, where she served as the mother of the church and adored singing and praising the Lord. Connie treasured her family and was affectionately called Nana by her grandchildren. She was the family historian. She had a great memory and could recall and reminisce about important family, people, places and things. She enjoyed reading, writing children's books, swimming, playing Uno, Dominos, baking and cooking. She also loved watching sci-fi, mystery and western movies. She leaves to cherish her memory her caring and devoted daughter and son in law, Kimberly A. and George E. Coles, Sr., with whom she resided with for 24 years. Three step-children, John A (Debra) Pennington, Kevin (Hope) Pennington, Sr., and Francis Hodge. Three grandchildren, George E., Jr. (Alexis), Corey A., and Brandy T. Coles. Five great-grandchildren, Corbyn J. and Mason J. Jackson-Coles, Giovanni A. Coles, Joshua and George, III (soon to be born aka Tre) Coles and seven step-grandchildren. Also, beloved siblings, Sandra Lockridge, Sheila Mitchell, Patricia Batch, William (Evelyn) Lockridge, Sr., Sylvia (Gregory) Polk, and Donna (Robert) Grimes. As well as a host of step-great grandchildren, nephews, nieces, cousins, and friends. She was preceded in death by her parents; and one brother, James Lockridge, Sr.; one brother-in-law, Henri Pennington; and sister-in-law, Bessie Harvey. The family would like to give special thanks for every act of love and sympathy shown and extended to us during our time of bereavement. We are most appreciative of your concern and love that has strengthened us to accept God's will. May God continue to bless and keep each of you in his loving and tender care. A memorial service to honor Connie's life will be announced at a later date.

Carrie L. (Connie) Lockridge Pennington was the oldest daughter born to the late Roland and Louise (Medley) Lockridge on March 25,1942 in Anjean, West Virginia . She went home to be with the Lord on March 4, 2021 in Penn Hills, PA. Connie was... View Obituary & Service Information

The family of Carrie L. Pennington created this Life Tributes page to make it easy to share your memories.

Send flowers to the Pennington family.