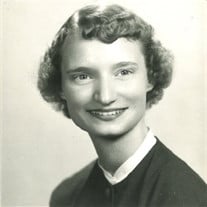 Barbara Harris Wright Barbara passed away March 25, 2021. She and her twin sister, the late Shirley Thompson, were born on April 27, 1929, in Scranton, Pennsylvania, to Esther and Walter Layton Harris. Growing up at the end of the street car line, she often helped the conductor switch the seats for the return trip to downtown Scranton. Barbara was valedictorian for Scranton Central High School class of 1947. Afterwards, she attended Wilson College, where she majored in Latin and minored in ancient Greek and was selected for Phi Beta Kappa. For nine years, Barbara taught high school Latin and English at Avonworth Junior-Senior High School. In 1957, after leaving New York City aboard the USS Constitution, she attended the American Academy in Rome as a Fulbright Scholar. Her class celebrated 4th of July at the US embassy and had an audience with Pope Pious XII. There are stories about her playing bridge in the Roman Forum. In 1959, Barbara married Charles T. Wright, who taught math in the adjoining classroom. Barbara was a fifty-year-plus member of the Sewickley Presbyterian Church, where she was part of the Women's Association and taught Sunday School. She was a past president of the Nursery School Board of the Presbyterian Church; past co-president of the American Association of University Women, Coraopolis-Sewickley Branch; past co-president of the Shooting the Bull Investment Club; and at the time of her death, alumni president of Wilson College Class of 1951. She was honored in 2000 by Sewickley Valley Hospital for more than 5000 hours of volunteer service over 20 years.For the last 40 years, she and Charles traveled frequently, visiting Barbara's sister in York, PA, watching plays at the Shaw Festival in Toronto, and enjoying outdoor concerts at the Chautauqua Institution. They toured the UK and the US with family, including her sister, Shirley, and relatives from England. She and Charles made their home in Leetsdale, PA until moving to Masonic Village at Sewickley in their 80s. In Pittsburgh, she and Charles regularly attended the opera, theater, ballet, symphony, and (always a favorite) the pops conducted by the late Marvin Hamlish.Known for her quick wit and her laughter. Barbara will be greatly missed by her husband of 61 years, Charles; daughter Ellen of McCandless; son David (Sarah) of Fredericksburg, VA; three grandchildren, Jacob, Andrew and Emily; and two nieces, Sandy Arnold (Rob) of Shaler, and Debbie Smith (Eric) of Chico, CA. Services to be announced at a later date. In lieu of flowers, the family requests donations in Barbara's memory to Reading is Fundamental-Pittsburgh, the Homeless Children's Education Fund-Pittsburgh, or to Wilson College's Wilson Fund (Annual Fund).

Barbara Harris Wright Barbara passed away March 25, 2021. She and her twin sister, the late Shirley Thompson, were born on April 27, 1929, in Scranton, Pennsylvania, to Esther and Walter Layton Harris. Growing up at the end of the street... View Obituary & Service Information

The family of Barbara Harris Wright created this Life Tributes page to make it easy to share your memories.

Send flowers to the Wright family.